This site uses cookies to provide you with a great user experience. Select “Accept Cookies” to continue or “More Information” to view detailed descriptions of cookie types.

More Information
VERIFY YOUR AGE
ARE YOU OVER 18 YEARS OLD?
YES NO
YOU HAVE TO BE OVER 18 TO VIEW THIS WEBSITE

HOME
BACK TO NEWS

During this interview, the brewers of FTELOS BREWERY Mr. Theodoros Bizios and Mr. Vassilis Ziovas explain the philosophy of this brand-new brewery and answer the questions that arise concerning the special brews that characterize FTELOS. 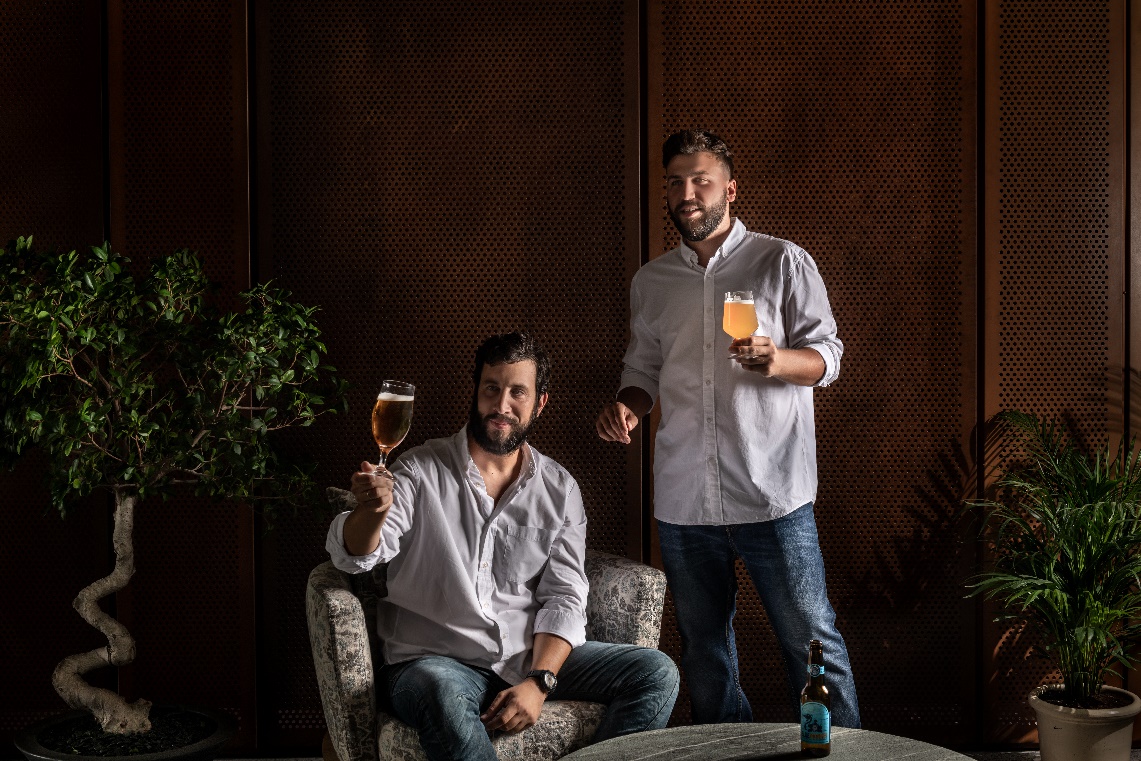 - WHAT IS THE MAIN GOAL OF YOUR BREWERY AND WHAT MAKES FTELOS BREWERY DIFFER FROM OTHER BREWERIES?

We are passionate beer lovers, committed to producing beers that people will love. Furthermore, we are in Santorini and the biggest challenge for us is to produce beers that will be characterized by the microflora and the terroir of this island. Therefore, we are brewing in Coolships, we are fermenting and aging our beers in used wine barrels from Santorini and new foeders / barrels with our unique strains.

- WHICH ARE THE BOTTLED BEERS OF FTELOS BREWERY?

All of our beers are available as draught beers, but our two bottled signature beers are the Blue Monkey Lager/Pils and the Blue Monkey Pale Ale. From time to time, we also bottle or keg some beers from each of our side projects.

- CAN YOU TELL US A BIT MORE ABOUT YOUR COMPANY’S PROJECTS?

The FTELOS production concept is divided into 4 projects:

- HOW COME YOU NAMED YOUR SIGNATURE BEER THE BLUE MONKEY BEER?

The blue monkeys painted on the walls of Akrotiri on the Greek island of Santorini are some of the many animals found on the frescoes of this 3,600-year-old town. Historians have been studying the murals for decades. It was most recently discovered that this Bronze Age civilization of Akrotiri was much more globalized than previously thought and this was our source of inspiration for this fresh, adventurous and aromatic beer. That’s our way of honoring this pre-historic civilization and communicating our tradition throughout the world, hoping that with this beer we will conquer the globe!

- MALT N MARVEL IS A UNIQUE NAME FOR A BEER, WHAT WAS THE SOURCE OF INSPIRATION FOR NAMING YOUR BEER LIKE THIS?

Malt n Marvel is not just one beer. These are two series of beers that are parts of our MALT N MARVEL PROJECT. These two series included in this project are the hoppy series and the herbs n fruits series. We believe that these beers are “marvels” that can uplift every moment of your life. Some of these beers include huge amounts of hops, others have large quantities of fruits and herbs from around Greece, while others are sweet or sour, blonde or black. The beers in the HOPPY SERIES and the HERBS & FRUITS series are tantalizing to the mouth and nose, as you can taste and/or smell features of the hops, which can be fruity, earthy, citrusy, floral, or piney. 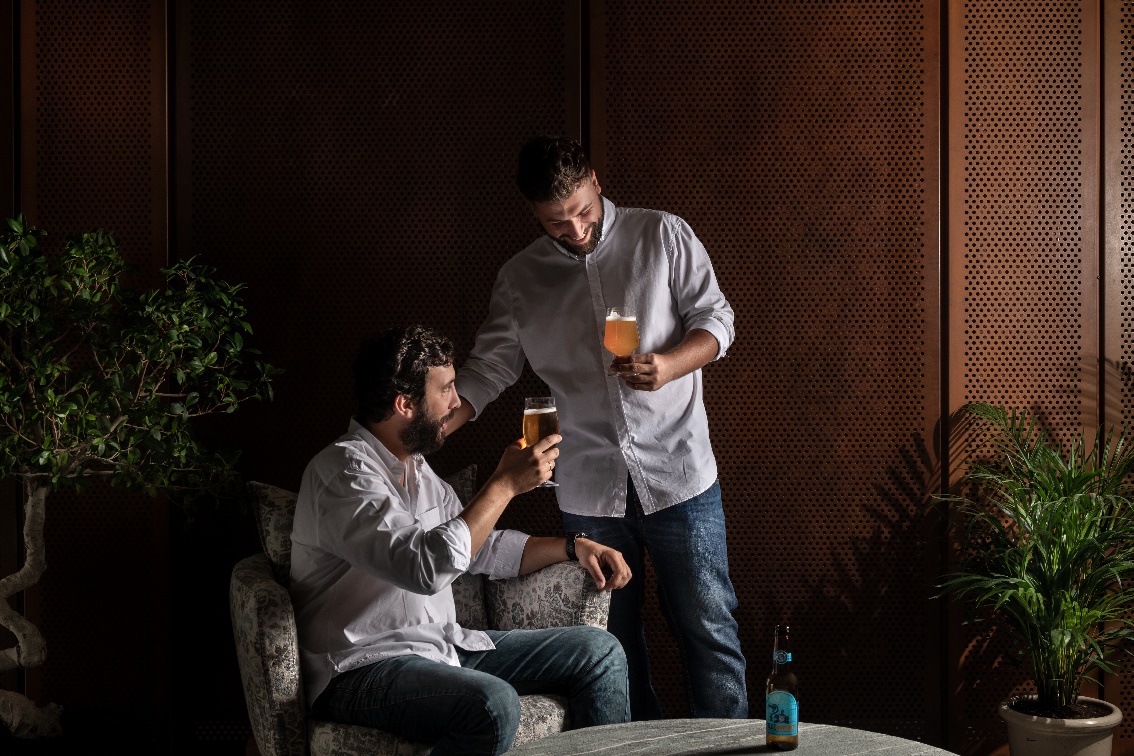 - CAN YOU EXPLAIN TO US THE PURPOSE OF HOPS IN A BEER?

Hops are one of the four basic ingredients of a beer. So even a beer that doesn’t taste “hoppy” still has hops in it. Without hops, beer would be overly sweet. Hops give the balance between bitterness and sweetness that most seek in a quality beer. Apart from that, hops have a lot of additional qualities to add to a beer like aroma, flavor, and natural preservative. Our hoppy beers showcase the hop flavor and the aroma of the hops. Hops can do amazing things to a beer. They can transform a beer from full body to dry, sour or sweet. The Hoppy series beers are known for exhibiting huge amounts of flavor from the hops while keeping the bitterness sometimes in low, medium, or high levels but always the flavor and the aroma are undetectable. By tasting a beer from our Hoppy Series, you can taste and/or smell the characteristics of the hops which can be fruity, earthy, citric, floral, piney, etc. based on the type of hop, without necessarily tasting bitterness.

- WHAT KIND OF FRUITS AND HERBS DO YOU USE IN YOUR FRUITS & HERBS SERIES?

Fruits & Herbs have been incorporated in European beers for hundreds of years. The story begins in Europe with the continent’s traditional wild ales, sours, higher gravity sweet beers, or light and dry beers.  Our Fruit N Herbs series turn to locally Greek and global grown fruits. The selections are based on what complements the flavors of the hops available at the time. Thira’s grape, black fig, prickly pear apricot, peach, mango, guava, pineapple, passionfruit, berries, etc. are some of the fruits we add to our Fruit N Herbs series beers. Moreover, the combination with spices and herbs like vanilla, coriander, cinnamon, bitter or sweet orange peel, tea, hibiscus flowers, etc. come to harmoniously complement the result. A balanced combination of hops, fruits, herbs and spices is the desired goal.

- THE TERROIR PROJECT THAT YOU MENTIONED EARLIER IS ACTUALLY A KNOWN PROJECT UNDERTAKEN BY DIFFERENT BREWERIES ALL OVER THE WORLD. WHAT’S SO SPECIAL ABOUT YOUR TERROIR PROJECT?

THE TERROIR PROJECT takes place once a year and is inspired by The Terroir Project born in California in 2017. We decided to share the passion and ideas for Santorini’s unique terroir through these rare and unique beers. These are really special brews, blends of spontaneous fermentation beer and Assyrtiko variety grapes harvested from old Santorini vineyards. A new beer, that is in process in our R&D dept right now and belongs in this project, it’s a beer that contains Santorini Saffron.

- THE “Φ” PROJECT AS I IMAGINE IS THE ONE THAT CHARACTERIZES FTELOS BREWERY SINCE «F» IS IN GREEK «Φ»?

The Φ Project is our biggest challenge. It springs from our deepest desires for dedicated beer brewing based on mixed culture and spontaneous fermentation. Our inspiration comes from the classic farmhouse breweries of Europe, which embrace principles of subtlety, patience and interesting fermentation character. The techniques used for these brews lead us to unique fermentations with our native character. The ageing process and the maturation of these beers take place in used oak barrels that previously contained santorinian vinsanto wine, bourbon, rum, sherry, brandy, or even vinegar.